When does grooming start and finish each year?

As soon as there is enough snow to run a snowmobile, volunteers are out packing the snow to make a good base. The compacted snow also has a better chance of surviving fall rains. Eventually, the trails are trackset and groomed with the G2 or Ginzu groomer. The PistenBully is only used once the snow is deep enough that we are confident it won't bring up rocks and dirt.

Grooming continues as long as we have enough snow, enough skiers and no danger of wrecking our machines.

Here are the opening and closing dates for several years: 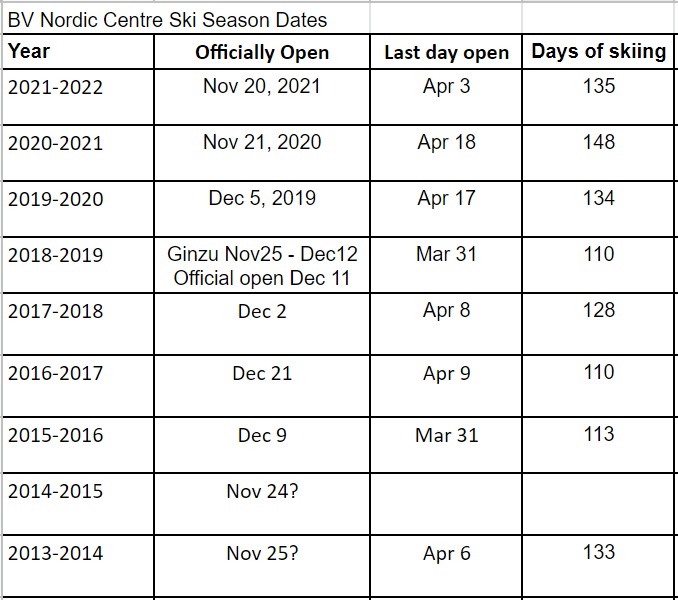 What grooming equipment does our club use?

The primary tracksetter for the club is a 2004 PistenBully Edge.  This machine has a powerful tiller which can groom and set a 5 m wide track with 2 classic and 1 skate lane, all in a single pass.

We also have a Skidoo Skandic snowmobile and a CanAm Outlander tracked quad that can pull our smaller groomers. We have a Yellowstone Ginzugroomer and a  Tiddtech G2 groomer, both of which can set a skate lane and a single classic track.

We also have three well-loved Ski Doo Alpine twin tracks which can pull a classic-only Yakka or a snow-compacting roller.

Why isn’t the PB grooming every day?

The PB can’t be operated in low snow conditions due to the depth of the cleats on the tracks and the aggressiveness of the cutters on the tiller.  This prevents it from being used in early season as the tracks and tiller will bring debris to the surface and spread it through the snowpack.

Throughout the season, the PistenBully is used when we have new snow; however, it must be used carefully for refreshing old tracks.  Each time the snow is tilled, the snow crystals are altered and become finer.  This improves the skiing surface in the short term but when the snow is tilled too much the crystals become small and rounded, creating a less than ideal surface. The snow can actually get “worn out” if we groom too often.

The Ginzugroomer has a less aggressive action and does not alter the snow crystals as much.  The snow surface remains more easily skiable for a longer duration.  The Ginzu is narrow enough that the skating lanes can be groomed without affecting the classic tracks.  In addition, the quad/snowmobile pulled Ginzu can travel faster than the PB, so more km of trail can be covered in a similar time period. To avoid “wearing out” the snow, we will use the Ginzu groomer to refresh the skate tracks when there has not been new snow.

The idea is to find a balance between the different machines to prolong the life of the ski surface.

In the spring, during frequent freeze/thaw cycles, the PB tiller does a great job of chewing up the ice.  Unfortunately, each time this is done, the snowpack is reduced and the ability of the snow crystals to adhere to each other is further diminished.  Snow crystals have a finite capacity ato be worked. We will still groom spring snow but there is a lot of science, art and luck in deciding on the frequency and timing that will best extend the season.

Why are trails groomed with a snowmobile/quad groomer sometimes?

Grooming with a small machine is the only option in low snow conditions. For the rest of the year, the grooming team may use the Ginzu or G2 to supplement what is groomed by the PB or as a better way to address the conditions of the day. The Ginzu or G2 pulled by quad or snowmobile is fast and economical to operate and reduces damage to snow crystals.  The narrow width of the implement also allows grooming of the skate lane without damaging the existing classic track. In the spring, if the snow is not too hard, the G2 and Ginzu, can grind up the top layer of snow without reducing the snowpack as much as the PB.  This allows the trails to be groomed more frequently.

Why is the skate lane soft sometimes?

Fresh snow makes for beautiful tracks, but…. fresh snow has lots of air in it and takes time and work to “set up” into a firm skate track.  The PistenBully has a tiller that spins and turns over the snow which really helps work the snow.  Still, after a deep snowfall, it will often take more than one tracksetting before the trail gets really firm.  When we get deep snow on the trails, we will try to open as many trails as quick as we can, but with a 52 km trail network, it may take a day or two before the PistenBully can make a second trip that will create a really firm skate trail. If we get a series of snowfalls, our efforts will be focused on keeping high use trails open so the second, track-firming pass may get delayed. Please be patient; fresh snow is a blessing and with a bit of time the trails will become amazing.

Why wasn’t my favourite trail groomed?

The goal of the club is to have outstanding trails when snow conditions allow.  Every day some trails will be set after a snowfall.  We start with the most heavily used trails but cannot set all our trails immediately. We try to set all trails within 48 hours of a major snowfall.  Priority trails that are usually set first are Broadway, the dog trails and the logging roads.

How long does it take to groom all trails?

The club has over 52 km of trails and in ideal conditions the PB can average 5 km per hour.  Theoretically, it should take a minimum of 11 hours to groom all the trails. In practice, it can take up to 16 hours due to extra time on junctions, connecting trails, out-and-back trails, and removing fallen trees.

When are trails usually groomed?

Grooming may take place at any time of the day or night, but there are two preferred times.  When there is overnight snow in the forecast, grooming will be scheduled for early morning to better facilitate the compaction of fresh snow onto the trails.  With no overnight snow in the forecast, the trails may be groomed at night to allow longer curing times for the snowpack which makes the trails more durable to skier traffic. Grooming during the day or early evening is normally avoided because of the number of skiers on the trail, resulting in safety concerns and damage to the surface from skiers following the tracksetter. In the late winter and spring, daytime is avoided because it is the warmest part of the day. Grooming staff will adapt their schedule to the weather conditions to provide the best trail surface conditions for users.

It snowed and there were not many trails set; how come?

If it snows heavily during the day, we may not be able to set trails that day. Usually, groomers are scheduled for the evening or mornings. Grooming during a daytime snowfall will interfere with skiers and could still result in snowed-in tracks at the end of the grooming shift.

Another time when it may not be feasible to set trails is after a wet snowfall, usually around freezing.  Moisture in the snow makes for great snowball fights but clogs up the PistenBully’s tiller.  Often, if a trail is groomed when its really wet, it will become icy later.  In these conditions, we may be able to set a small amount of trail with the Ginzu, the Roller, or the Yakka (classic track only).  The best strategy is usually to wait until evening or the next day when cooler temperature dries out the snow and allows the equipment to do a good job.

Another challenging condition is spring during freeze-thaw cycles. If we set the trail while its wet, it could result in a very icy surface.

The PistenBully seems to break down a lot; what’s up?

The PistenBully is a complex piece of machinery with multiple hydraulic pumps and lots of moving parts.  Like any major piece of machinery, it will experience occasional breakdowns. While our PB is older, the club has spent considerable effort and money on “pro-active” maintenance to repair or replace worn parts before they break.  This strategy has reduced but not eliminated down time during the season. Recognizing that there will be down-time, the club has backup strategies in place to ensure that we can continue grooming. We have several auxiliary machines and several trained operators ready to go whenever there is a problem. Those machines and people are also ideal for low-snow conditions or for supplemental grooming when the PB has not yet caught up after snowfalls. The reliability and effectiveness of our backup machines has been enhanced with the recent addition of a tracked quad that was mostly funded by club member donations.

The club examined options for a newer machine and decided that our PistenBully Edge is ideally suited for our trails and our conditions. Experts tell us that if well maintained, this PistenBully can provide good service for many more years.  Even new machines will break down; one of the challenges of living in the Bulkley Valley is that we are a long distance from the specialist dealerships that new machines require. When the PB breaks down, we have trusted mechanics who can work on it on site and get it back up and running quickly.

How can skiers help with trail conditions?

You will help the trails if you can avoid skiing right after a trail has been groomed. It takes about an hour for the snow to set up and provide solid tracks and that lovely firm corduroy skate lane. If you come across a tracksetting machine while you are skiing, please get off the trail in a place that the operator can see you. After it passes, please ski to the nearest junction and use an alternate route while the tracks set.

It is OK to clip small branches or brush on the trails. No chain sawing unless you have first checked with the groomers and you follow the club’s safety rules.

Where do I direct my grooming compliments and suggestions?

Send feedback about ski trails to trails@bvnordic.ca. Your comments are appreciated and will be read but you may not receive a reply. We want our groomers to spend their time on the trails.

General comments and questions about the club can be sent to feedback@bvnordic.ca. A club volunteer will try to respond if you have a question.